As part of our 50th anniversary, Foundation is celebrating our fund donors, and sharing their philanthropic motivation. In this feature, Jonathan Fisher and Linda Slotin explain how their hope for the future is Jewish continuity.

Jonathan Fisher and Linda Slotin opened their fund with the Ottawa Jewish Community Foundation in 2015.

What prompted you to open your fund?
“We were getting married and Paul Finn suggested we set up a fund so people could make a donation instead of gifts. We both had homes, so we had everything and really didn’t need anything extra. Also, we thought opening a fund would be more meaningful and would support Jewish and non-Jewish charities.”

On which occasions do you add to your fund?
“Weddings, engagements, bar and bat mitzvahs, get well wishes, etc.”

Please describe your Jewish journey.
Linda: “I began my Jewish education at Talmud Torah Day School in Winnipeg,  My parents imbued in me with the notion that being Jewish was in my genes, in my DNA.  I have been an active shul member as an adult.”
Jonathan: “I was evacuated to Scotland from London during the Second World War and was sent to a Hebrew tutor. So, I learned Hebrew before English. After the war, we returned to London and lived in a Jewish area. I went to cheder, shul and a Jewish day school.”

Your most impactful Jewish experience?
Linda: “When I had my children, I joined a shul. As a mother, I got involved with the shul and felt extremely comfortable being part of the Jewish community. Also, I am very Zionistic and love Israel.”
Jonathan: “My first trip to Israel, and Jerusalem in particular. Seeing that almost everyone was Jewish, the restaurants were kosher and all the biblical sites. Very upfront and personal.”

What causes are you most passionate about?
Linda: “IRAC, the Israel Religious Action Centre, which fights through the judiciary for equality for all Israelis, for example, Women of the Wall. Also, the University of Ottawa Heart Institute and Parkinson's Canada. ...

“I would like to see the Conservative and Reform movements have as large a voice as possible in the World Jewish Congress and become an influencer for ideals in Judaism which I hold dear.”

Jonathan: “Cancer research and general Jewish causes... (and) encouraging others to give so more people will have a Jewish journey."

Which Jewish institutions do you want to ensure exist for the next generation?
“Synagogues, schools – both day schools and Sunday and afternoon supplementary school, Hillel Lodge, and Tamir.”

What should Jewish Ottawa look like for the next generation?
Linda: “Very inclusive. Jews need to be committed to fighting antisemitism and not be narrow-minded. CIJA, the Centre for Israel and Jewish Affairs, is very important.”
Jonathan: “Be part of the real world. Modernize the shul service, make it simple and more meaningful.”
Both: “Make the Jewish religion more attractive and adapted to the modern world, and more interesting for young parents who will involve their kids in Jewish life, for example, shuls and schools.”

What do you want your legacy to be?

“To see Jewish continuity in the family and with the people we love. We hope by our example of joining a shul, our children will continue our traditions of Judaism and pass it on for future generations.” 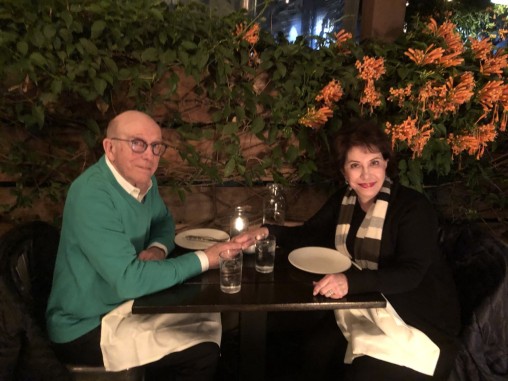